Why you should be concerned that your data is still sitting on tape.

Back in the early 80s, innovations like the personal computer, the Walkman, and the game console were at critical mass.

If you were working in IT you’d also have purchased a number of tape drives to capture and record all your company data, with the expectation that the data you recorded on the tape would last for twenty-five or more years. You most likely also assumed that the tape drives themselves were designed for a long enough life to read the tapes they created.

As time passed and new innovations continued to entrench themselves in our everyday living and working life, a force was emerging that would materially affect the life span of all IT infrastructure including those important tape drives. That force is related to Moore’s Law which states an industry can expect the speed and capability of computer systems to double every couple of years whilst at the same time they are paying less and less for them.

This rise in compute capacity, also increased the volume of data being created, and in turn, drove tape drive manufacturers to design faster and higher capacity tape drives to keep up with the data deluge.

The release of new backup tape drives also began occurring at a faster rate than anticipated. Having gone from 10 to 15 years utility they began lasting for shorter periods of time, down to two years; before the drive becomes superseded or obsolete, again driven by higher capacity drives to keep up with data creation rates. 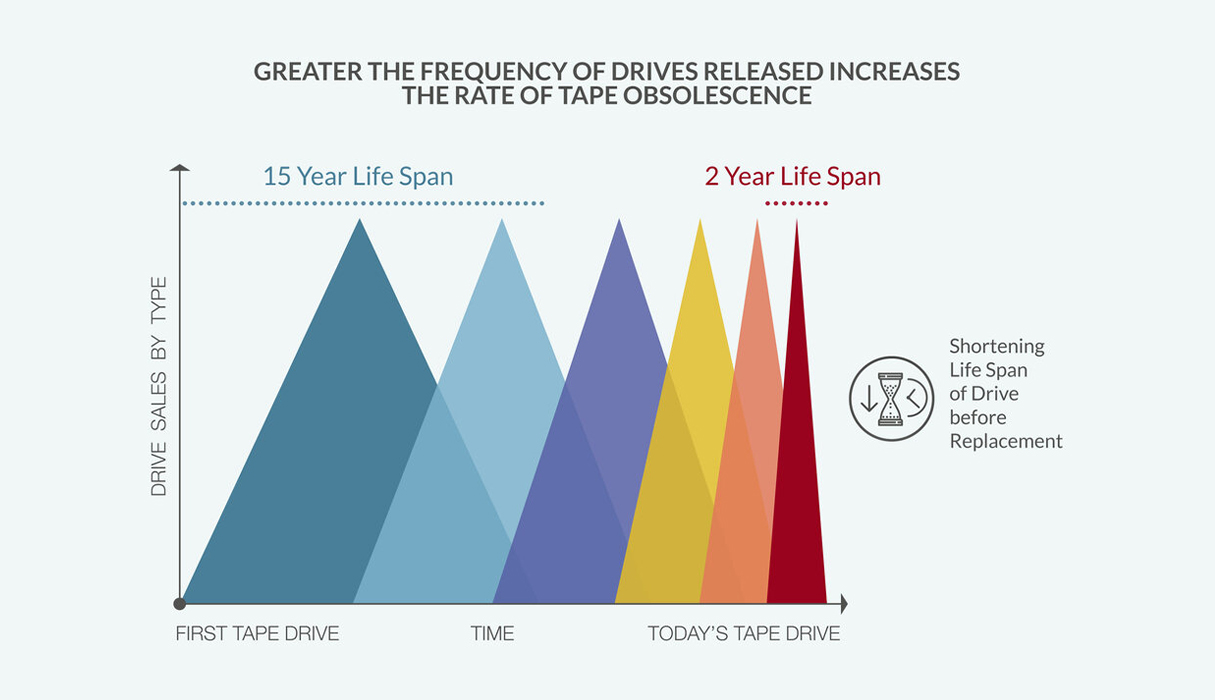 Drives are now designed to last only a few years and many have limited backward compatibility. An LTO7 can only read one generation backward to an LTO6 and nothing created prior, whereas the LTO6 can read two generations back to LTO4

So what does this mean for IT infrastructure and data access?

Getting ahead of the tape drive upgrade treadmill.

Modern IT functions are migrating their tape collections to the cloud or hybrid infrastructure. Because backing up to the cloud will see you never need a tape drive again, freeing up costs, resources, time, and creating opportunities to access enhanced cloud-enabled tools.

There has never been a better time to think about cloud backups and restores and tape virtualization to get off the tape drive upgrade treadmill and advance your organization’s IT infrastructure and capabilities.

Despite the risk profile of the shrinking hardware life span, there is also the risk inherent in media degradation and the readability of media types as they age.