Rock and Roll and Oil

Late in 2019, Tape Ark completed the data recovery and cloud ingest of a critical piece of the world’s music heritage – the back catalog of concert video and interviews accumulated by the Rock and Roll Hall of Fame in the United States.

The archive comprised 2,800 hours of preservation quality video, trapped in a legacy TSM format (Tivoli Storage Manager), with an unavailable database index on aging tape media.  As a result, it was unknown which tapes contained what files, the order the tapes needed to be read, or what specific content was expected to be found. TSM is considered one of the more complex backup formats and typically requires the original application to unravel it. Even then, without the data index, it can be a mammoth task to overcome.

When approached by the Rock Hall, Guy Holmes, Tape Ark CEO, could not resist the urge to get involved. He said, “it was because they had a problem that I knew we could solve, and the data was a significant part of global music history.”

Using Tape Ark’s mass migration technology platform, the data was not only recovered, but the format unraveled without the need for the TSM software or its index. Files that spanned tapes were reassembled, and the footage recompiled and compared to its original MD5’s to ensure an exact copy was created; the project achieved a 0% data loss.

Reflecting on this project and the topic from the PPDM (Professional Petroleum Data Management Association) panel discussion, i.e. the importance of rapid innovation in the oil and gas sector (panelists were tasked to look at examples outside of the industry and how these could be applied within the sector). Guy, a geophysicist who has spent a large part of his career in the oil and gas exploration industry, could see that there were commonalities between music and seismic waves.

“In both sectors, the content is expensive to produce, has lasting value, is retained for long periods, and there is a material benefit when cloud-enabled tools such as AI and ML or even remastering is applied. The obvious and most interesting parallels are they both have waveforms of sound, one music the other seismic. Looking at the samples below gives you an idea of the resemblance between the two,” said Holmes.

Paolo Dell’Aversana, an ENI geophysicist, also saw the similarities and has spent years researching the overlap between music and seismic extensively. More information can be found here, where you can listen to his interpretation of seismic data at 9.45 minutes. 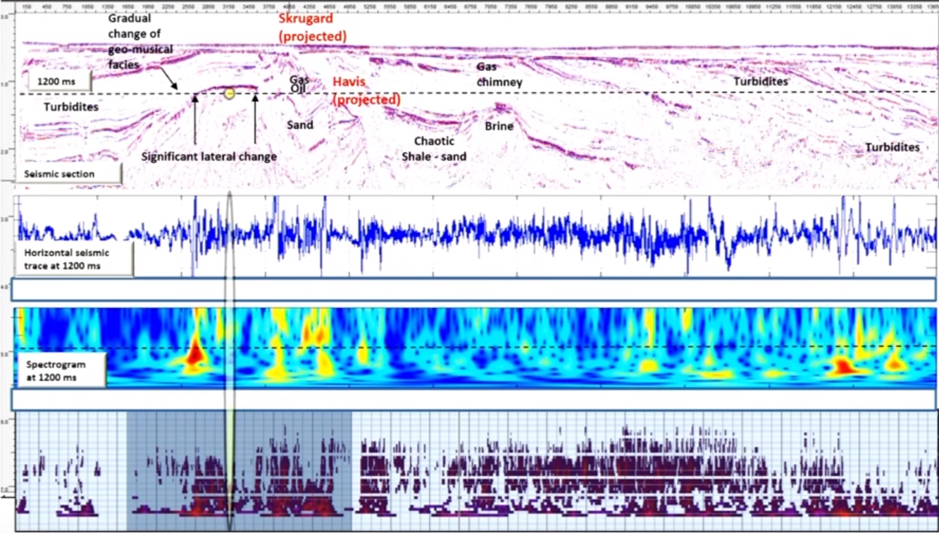 Paolo Dell’Aversana, an ENI geophysicist who has researched the overlap of music and seismic extensively.

Interestingly, the raw material used in both music and seismic is the same – waveforms. Both industries apply filters and do their best to limit noise, but then they start to depart from their parallels. Making music in many ways is about finding and aligning patterns to perfection and introducing new waves that fall into a conforming pattern with the rest of the waves. Seismic workloads, however, tend to focus on finding and analyzing disconformities or changes to patterns and emphasizing them. One could say that they both look for the same thing (disconformity), and then focus on the opposite as one tries to enhance disconformity to study it, while the other seeks to eliminate it altogether.

Often it takes seeing an old problem in a new light to create that next evolution of technology. Maybe the toolsets used in music that focuses on finding and eliminating noise and disconformity can be adapted to seismic to enhance our tool sets? Perhaps the filters used in music to reduce noise are potentially better candidates for seismic waveform analysis?

Of course, the next evolution is the application of AI and ML tools across these industries rather than just within only one of them. In music, Spotify analyzes your music preferences and also reviews new music tracks that help to keep your feed fresh and puts the best music options in front of you. AI and ML in the seismic industry are also looking to help with preferences by pointing out geological features that geophysicists love to look at in a first past triage of sorts. It is not too far fetched to think of a Spotify for seismic that uses AI to recommend specific contractors for projects based on the structural analysis done by the AI. Imagine a complex deepwater geological feature identified by AI helping to produce a list of drilling contractors that have had success on similar complex drilling targets.

At a high level, just using musical instruments to “play” seismic data has some exciting possibilities. A sight-impaired geophysicist may find listening to his seismic an invaluable tool for interpretation of data is one example. At the end of the day, just being able to utilize another human body sensor (your ears) for analysis might mean that just sitting back and listening will be a good day’s work.

Innovation is key to any industry surviving and evolving. Looking for parallels between two distinct industries allows players to take a fresh look at problems and how best to solve them. Though looking for patterns in music and seismic share surprising similarities, both industries come at the issues in quite different ways. Often it only takes seeing an old problem in a new light to create that next evolution of technology.

“I could not resist the urge to get involved with the Rock and Roll Hall of Fame, and the experience has led me to think about the ‘what ifs’ between music and seismic waveforms. Our purpose at Tape Ark is to liberate the world’s second-largest collection of data, stored on tape, to the public cloud. This journey has taken us across many fields and industries to prove the point that data locked on tape is at risk of being lost forever. From the Apollo 11 sensor data to mining operations, 1960’s battlefield intelligence to the data from wing stress tests of F16 fighter jets and many others. We’ve found one consistent theme emerges from our work – when data is liberated from tape we can harness new insights that were never before imagined and the data’s value can truly be realized,” said Holmes.

Back to Blog
We all know data management processes can be fragmented, and current interfaces can have limited capability. The reason for this ...
Read more
In this exclusive oil and gas webinar, presenter Guy Holmes, CEO, and Founder of Tape Ark shares his knowledge and ...
Read more
Tape Ark are proud to announce their induction as Gold Members of the leading industry body Open Group’s Open Subsurface ...
Read more